The metamorphosis is complete!  Picnic Shelter #16land has fully transformed into Kitchenland!  Citizens are rejoicing throughout the High Park Kingdom.  Everyone is abuzz with excitement … so many new programs, so much potential for vegetable fun!

For over 10 years our beloved little Picnic Shelter #16land was home and hearth to our many fun Organic Gardening and Nature Hiking Programs.  It served us well through heat waves and thunderstorms, snow flurries and hail.  Many a royal messenger’s communication devices were charged at its little electrical hearth as were many a royal tea kettle boiled.

As time wore on the Children’s Garden and Exploring Toronto Programs grew and eventually Picnic Shelter #16land had to grow too.  Having our royal participants use the fresh organic fruits and vegetables from the High Park Children’s Garden is an important part of our Program Vision.

Alas due to a lack of kitchen space at the Children’s Garden many of our cooking programs took place in the adjacent Kingdom of Parkdale.  So it was difficult to make the connection between the fruits and vegetables growing in the garden and using them as yummy ingredients for our popular cooking programs.

Accordingly an idea was hatched … why not turn Picnic Shelter #16land into Children’s Teaching Kitchenland!?  Thus the metamorphosis began … and now Kitchenland has emerged from its chrysalis, ready to host royal program participants from across the GTA Territory and beyond (yes … even the far-flung Kingdom of Barrie! 😉 ).

Slowly but surely the Kitchen broke free from its chrysalis (with a little help from the valiant carpenters 🙂 ). 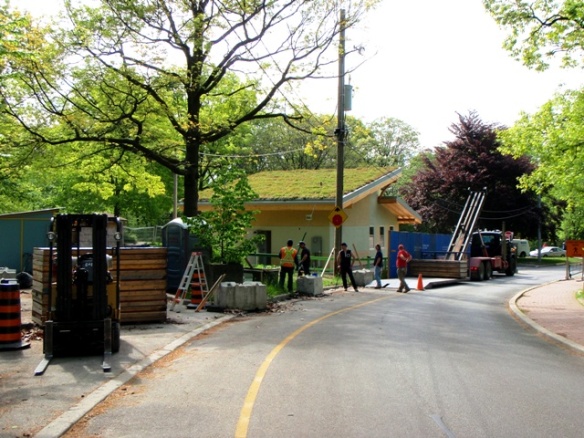 As the sparkling silver and blue chrysalis fell away from Kitchenland, its own beautiful colours began to emerge. 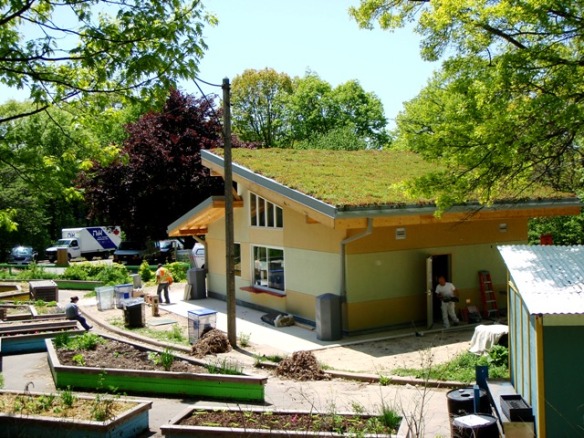 Sinks were cleaned, appliances were unwrapped and counters were wiped down, several times (construction dust doth not disappear with the wave of a magic wand after all 😉 ).  Slowly but surely Kitchenland began to shine!

A large serving window, wheelchair accessible from both sides, will provide easy access to the Children’s Garden from within Kitchenland.  It will also allow us to serve royal program participants many a free harvest lunch during free community events!

A first-aid corner next to the grand entrance to Kitchenland will help heal citizens with minor scrapes and bruises. 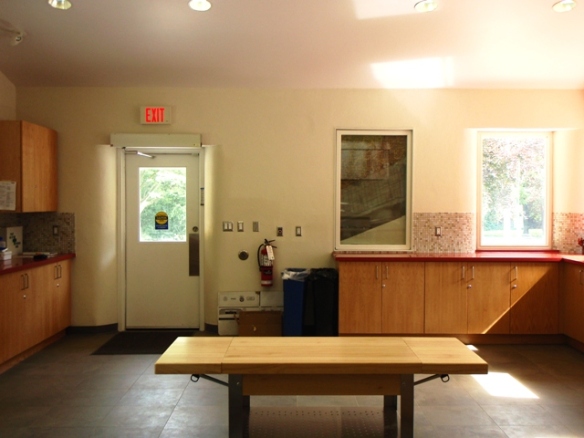 Next is, what many may consider, the most important part of Kitchenland itself.  No longer will the menace to Kitchenland cause trouble and strife!  The slayer of dirty dishes, the eradicater of cooked on and crusty food, the annihilater of all the olive oil that we tend to use 😉 …

Yes folks!  We are talking about a beautiful three basin sink with an overhead spray attachment on the faucet and an under-counter commercial dishwasher 😀  No more will old Picnic Shelter #16land’s mighty nemesis, the dreaded dish pit, cast fear in the hearts of our loyal staff and volunteers (mind you there were times where parents couldn’t pull their kids away from doing the dishes.  Probably the novelty of washing dishes in big plastic bins). Our new Kitchenland is now equipped with the best pot scrubbing equipment in the Kingdom! In all honesty it’s likely there’ll be some serious competition over who gets to use the sprayer 😉

Sorry … as you may be able to tell we’re more excited about our dishwasher than anything else in the Kitchen 🙂  Moving along, we also have a very important addition to our south wall.  It’s called a truth window.  These windows are typically found in most straw bale homes and buildings, however, not usually of this size.  Our window is much larger for educational purposes. 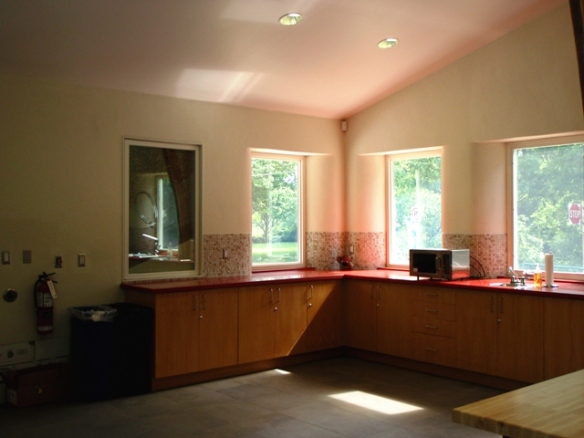 Another important addition to a functional kitchen is a strong counter-top.  With all the cooking, crafting, paperwork, plants and fun happening throughout Kitchenland a good counter is indeed the most necessary of items!

It also doesn’t hurt to add a splash of colour throughout Kitchenland 😉  Especially if you’re talking about a space meant for the young citizens of the High Park Kingdom!  Our beautiful counter-top was another one of those happy accidents.  In a similar situation to our truss, this counter-top was not the original chosen but after a long discussion with our royal artisans it was determined that only the colour red would do!

Alas the exterior serving counter was slated to be grey but in a stroke of luck the colour was unavailable and the red counter saved the day! 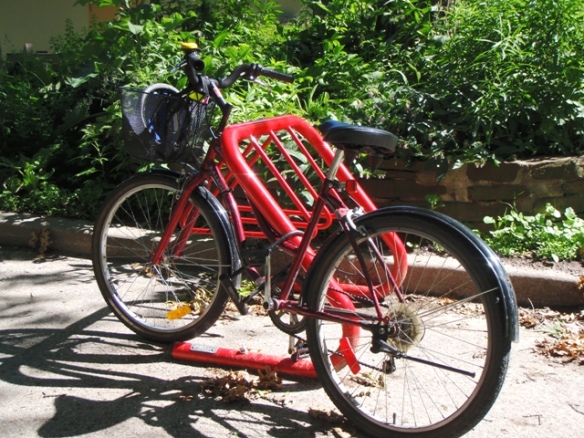 We’re planning to add a few more stables to house the many bicycles used when travelling to Kitchenland.  We are very happy to provide a safe place to lock up your trusty steed! 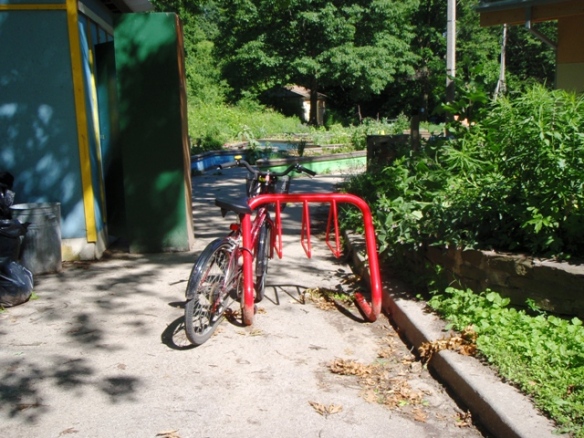 From here there is only one destination left to visit within the wonderful new Kitchenland.  It’s truly the most regal of rooms, the fanciest of facilities, the prettiest of places … it’s the destination of destinations!  Here’s a little hint of which amazing area we’re talking about … 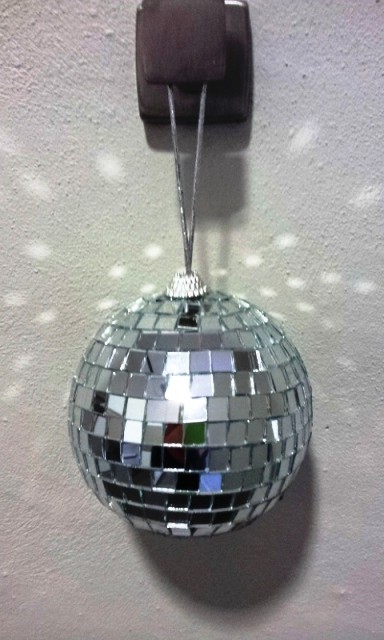 Yes you guessed it!  It’s the royal throne room 😀  The fanciest washroom facility throughout the High Park Kingdom.  So fancy in fact we thought a little glitter would provide the crowning touch! 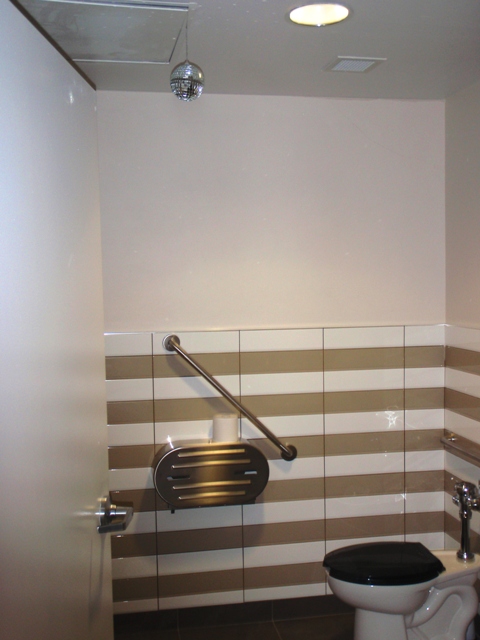 The automated fixtures in this royal washroom will help save water and keep Kitchenland clean in the process.  As with all our choices for this amazing new Parks Facility we were concerned with keeping things environmentally friendly!

We would like to thank our Sponsors – Inline Fiberglass, LiveRoof Ontario Inc. and Stone Tile International for their generous donations without which Kitchenland would still be but a dream! 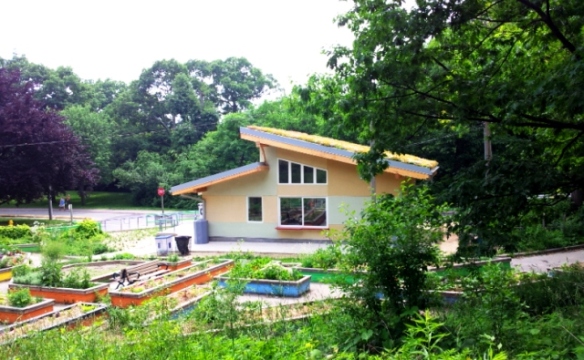 And that dear friends is the story of how a beloved little picnic shelter completed its metamorphosis into a beautiful Children’s Teaching Kitchen.

This site uses Akismet to reduce spam. Learn how your comment data is processed.