Hear ye! Hear ye! Citizens of Kitchenland and the High Park Kingdom … We have officially made it to the Framing Frontier!  Through the valiant effort of a gifted band of carpenters we have what looks like a proper building 😉

There are two basic ways in which a straw bale building is built.  You can either build window and door frames and use just the straw bales for your walls or you can build a post and beam frame and fill in around those beams with your straw bales.  Both of these methods use much less wood than a traditionally framed building would use.  It was decreed by the High Park Kingdom elders that the post and beam method of straw bale building be used. 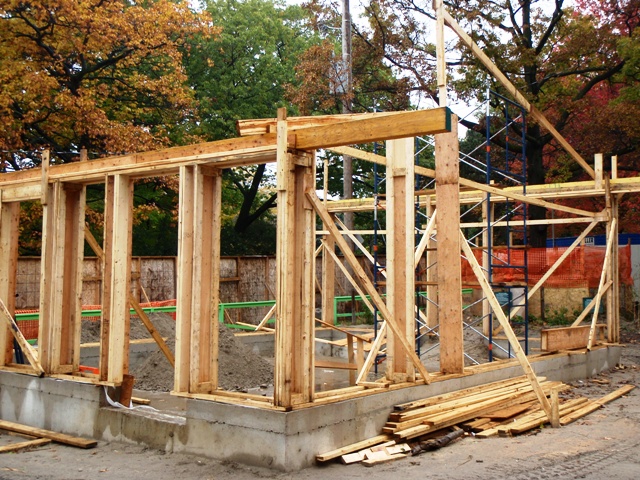 From the humble beginnings of north and south walls our valiant band of carpenters created a framework for the straw bales, windows and doors. But this was merely the beginning!  There was rumour throughout Kitchenland that an epic journey was to take place!  The truss, the key element to building Kitchenland, was all but lost!  The truss is the strength and backbone of Kitchenland.  Valiant squires set forth upon this epic journey to bring back a mighty truss for Kitchenland.  Alas the journey was fraught with obstacles and great tests of fortitude!

However, our gallant squires prevailed and at the end of their journey a beautiful truss rose from the foundation of Kitchenland (even better than the one planned!).

And what a beautiful truss it was!  This marvel of engineering was created with timber many others cast off as unworthy of their attentions.  Alas this poor wood was left behind as others were chosen.  With sadness in its heartwood the timber lay cold and alone.

But don’t forget as often happens in these situations … a Knight of the realm (not High Park Kingdom but within the GTA Territory) came upon the sad timber and saw the great potential within its heartwood!  Thus the slightly bent and turned but still structurally strong wood was used to create the backbone of Kitchenland.

Once this glorious truss was set in place the roof beams were quickly attached … there was no time to waste as winter was swiftly stealing across High Park Kingdom. 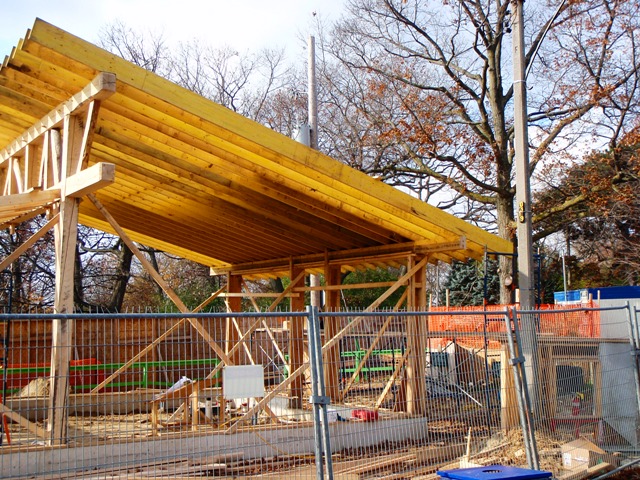 It soon became apparent that the closing in of the structure was indeed a great priority!  East and west walls were built and window frames created to help keep Kitchenland safe from the snow …

During the framing of Kitchenland many of the larger pieces of equipment were installed to keep the water flowing and the air clean.

With Kitchenland now fully taking shape many of its citizens were dreaming of the meals they would create for the people of High Park Kingdom and the GTA Territory.  Vegetables of all shapes and sizes … all the colours of the rainbow would be used to create healthy food for all.

Our epic adventure continues with A Straw By Any Other Name …

One thought on “The Framing Frontier”

This site uses Akismet to reduce spam. Learn how your comment data is processed.